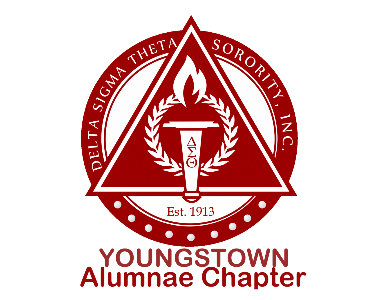 The establishment of a chapter of Delta Sigma Theta Sorority in the Youngstown community was originally envisioned by seven sorors.  They devoted an enormous amount of time and energy to the fulfillment of their endeavor, working diligently to meet the requirements for chapter establishment set forth by Grand Chapter.

On May 19, 1951 four women were initiated as charter members and Delta Lambda Chapter was formally established. Charlene Alexander served as the first president.

The chapter recognized its 50th anniversary in 2001, its 60th anniversary in 2011, and its 65th anniversary in 2016 with grand celebrations. Youngstown Alumnae Chapter has dedicated itself locally to the goals established by Grand Chapter throughout its 60-year history, including a focus on mentoring and involving youth in service learning. In particular, Delta GEMS (Growing & Empowering Myself Successfully) for young ladies ages 14-18 and Delta Academy for younger girls ages 11-14. These youth programs promote goal setting, academic preparedness and a commitment to the community. The projects cultivate an atmosphere where the young girls can enhance their self image, practice positive attitudes and self confidence while empowering them to be leaders in the 21st century.